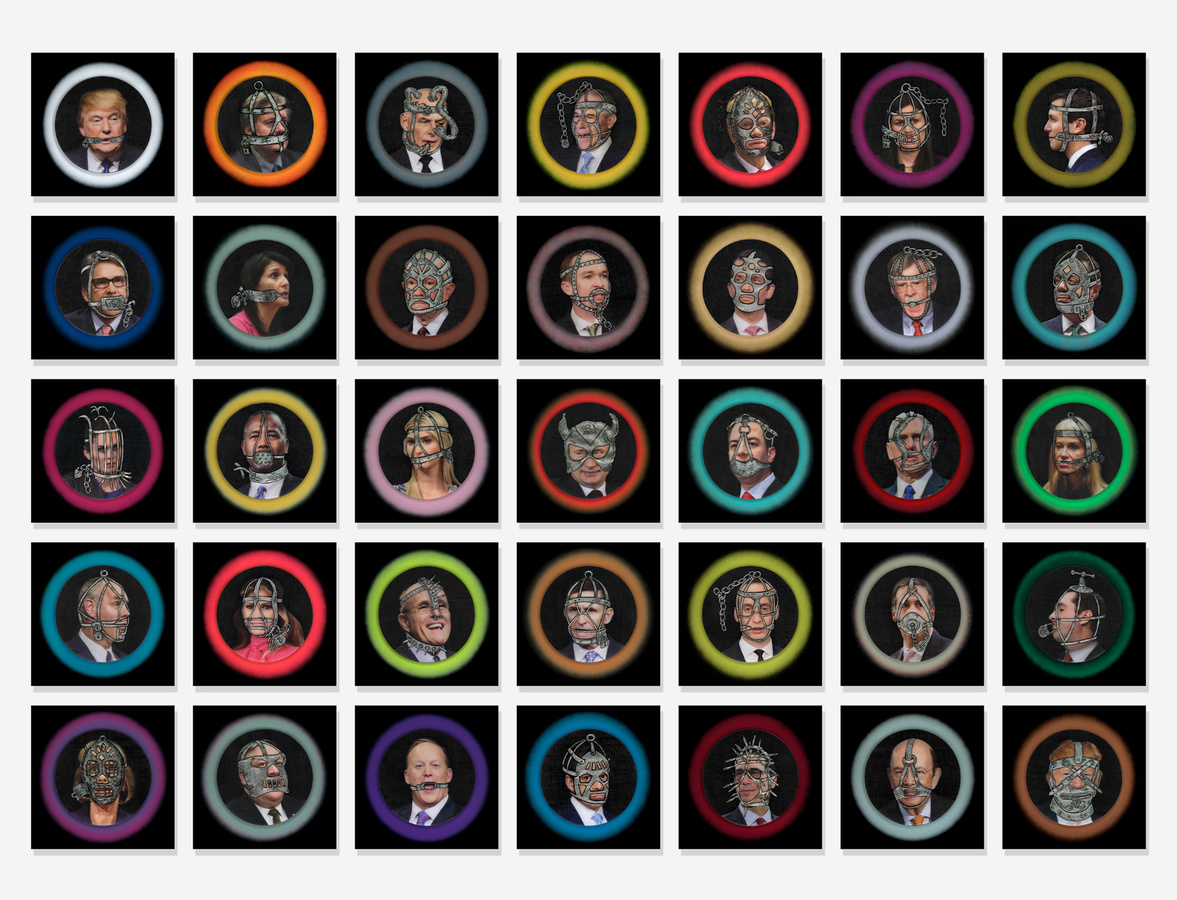 Censorship in art, society, and politics are issues I continually wrestle with in my work. Leading up to the fall of 2017, I had been focused on imagery related to masks that silenced women and slaves, often called Scold’s Bridles. With that work, I was exploring women and their ability to survive and succeed despite crushing oppression.

Looking back, the oppression of women was a natural segue to the work documented here. By the fall of 2017, less than a year into his presidential term, I was so angered by Donald Trump and his total lack of moral character and blatant bigotry that I conceived the Wall of Shame series. My visceral reaction to Trump and his political corruption and incompetence drove me to investigate his underworld, even though I found it deeply painful and upsetting. About the same time there was a dramatic photograph on the front page of the New York Times of a total solar eclipse. When speaking with a friend, she said that the black blot with the white halo around it, reminded her of Trump blocking out all our light and joy.

Beginning this work, I decided to put similar bondage devices on Trump and his thugs that I had put on the women in my earlier series. In addition to the bridles that I had discovered, I found various painful restraints that were used on slaves. I visualized an installation that would be like visiting a portrait gallery – but instead of finding rows of dignified persons, there would be a display of vilified demons.

Making the portraits was a complicated process which began with researching images of the different characters in Trump’s swamp, and using photographs from the news media. This was a grueling period that entailed looking at their faces and finding the right expression that best conveyed their personalities. I would then paint a mask that best suited the structure of the individual face. Finally, the mask and face would be transferred onto separate layers of plexiglass. The sizes of the pieces are relatively small, 13 inches square. A ring of paint is sprayed onto a black back layer referencing a TV screen, creating the feeling of a target or trophy.

I started with Trump himself, using that concept of the solar eclipse, putting a small bit and reins on his face like the headgear used to control a horse. Next followed a succession of portraits beginning with Steve Bannon, David Duke, Kellyanne Conway, Mike Pence, Betsy DeVos, Vladimir Putin, and Ivanka Trump. Finally at #35, I could do no more. I felt an overwhelming need to go on to something more positive even though Trump’s cesspool of conspirators continues to grow. Rudy Giuliani was at the end right before another image of Trump, which was the last one I completed. The final mask is one of full bondage similar to ones that I had discovered on a German sex site.

Now in 2020 with the election for President coming up, I am compelled to revisit this history, this Wall of Shame, which has only worsened with time. The pandemic crisis and lack of leadership has made us vulnerable in a way that puts our very lives and democracy in danger. We must – now, more than ever – speak out and show our fortitude, resilience, and integrity.