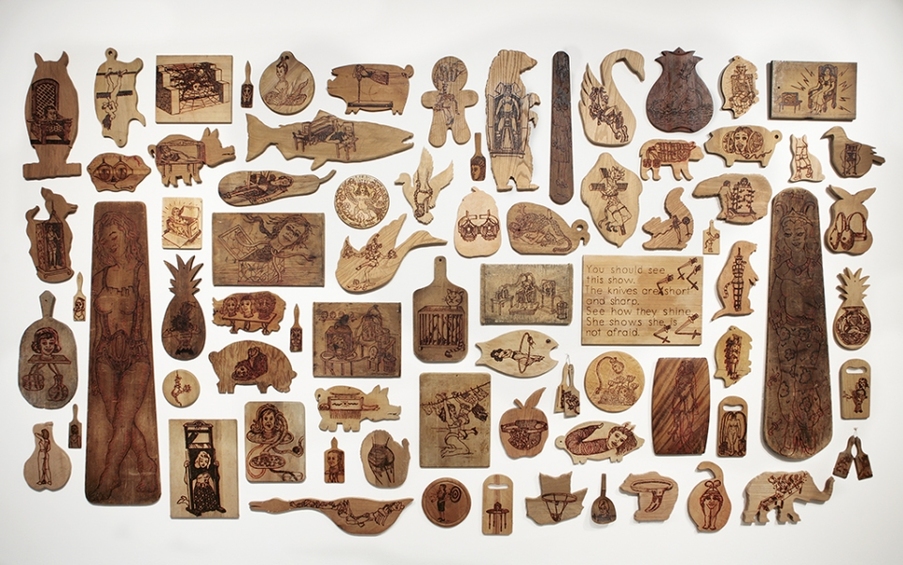 "The Hundred Headless Women, a wall installation of wood burned kitchen cutting boards and ironing boards, was originally created in 2001 for "The Torture Museum" in the artist's traveling interactive exhibit, "The Sideshow of the Absurd". The images are of women in perilous and challenging situations. An arrangement of selected cutting boards was most recently exhibited at the Edgewood Gallery, Yale School of Art in the fall of 2014.

The full installation was exhibited at the Harvey/Meadows Gallery in Aspen, CO February-March 2014. The cutting boards were part of a group show in 2013 called Circus, at Gallery Project in Ann Harbor, MI. In 2006, the wall was exhibited in Decades of Influence: "Colorado 1985 to Present," curated by Director Cydney Payton, at the Museum of Contemporary Art in Denver and also in "Finding Balance" at the Houston Center for Contemporary Crafts, curated by James Surls.
THE HUNDRED HEADLESS WOMEN
Loading...